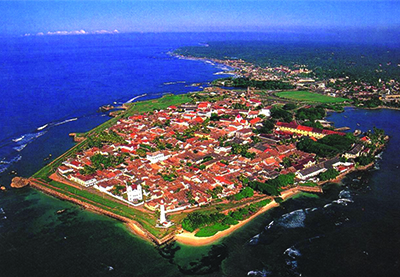 Sri Lanka can boast of one of the highest concentration of UNESCO World Heritage Sites packed within such a small land-mass. Its 2000 year old civilisation makes for a wonderful background for an anthropological immersion.

The Sri Lanka World Heritage Quest covers most of the island nations greatest heritage structures. From the Lions Rock in Sigriya to the unique dagabas of Anuradhapura, this tailored holiday will take travellers on a journey of discovery. Also experience the contemporary charm of towns like Galle, Kandy & capital Colombo during the course of this trip.

On arrival in Sri Lanka, you will be received by our representative and transferred to Negombo.

You have the rest of the day free to rest at the hotel or explore the city at your leisure.

On completion transfer to Sigiriya via Dambulla, a vast isolated rock mass 500ft high and a mile around the base. Here, visit the famous Rock Temple dating to the First Century BC. The caves of Dambulla sheltered the King Walagamba during his 14 years of exile from Anuradhapura. When he regained the throne he built the most magnificent of Rock Temples to be found on the Island.

Sigiriya is home to the 5th Century “Fortress in the Sky” which is perhaps the most fantastic single wonder of the Island. It is also known as Lion Rock because of the huge lion that used to stand at the entrance to the fortress. Within its triple-moated defence the huge rock rises almost to a sheer height of 500ft. On its summit are the foundations of what was once a great and sumptuous palace and gardens complete with a swimming pool. On one of the stairways the only known ancient work of Sinhala secular painting survives in the form of Frescoes of life sized damsels in all the freshness and delicacy of their original colour.

The next morning, leave for Polonnaruwa after breakfast. Polonnaruwa, which was Sri Lanka’s Capital from 11th - 13th Century, is home to some splendid and spectacular scultpures. Visit Lankatileke, Tivanka and Thuparama – three of the largest, and most beauiful shrine ruins. At Tivanka, you will find the best specimens of frescoes from the Polonnaruwa period. Rankot Vihara and Kiriwehera are well preserved large stupas, and Gal Vihare - a rock shrine, has four Buddha statues, two seated, one standing and one reclining and Parakrama Bahu statue are examples of Sinhalese stone carver. The Vata-da-ge is a unique creation of the Sri Lankan artists.

On completion, transfer to Anuradapura and overnight stay at HERITAGE HOTEL OR PALM GARDEN VILLAGE, Anuradapura.

Anuradhapura is the most celebrated of Sri Lanka’s ancient ruined cities. The city’s greatest treasures are its dagabas constructed out of small sun-dried bricks and hemispherical in shape. The most notable of these dagabas is the Ruvanveli which dates back to the 2nd Century BC and is 300ft in diameter, the Jetawanarama which is 370ft and the Thuparama which enshrines the collarbone of the Buddha. The city’s most renowned relic is the sacred Bo-Tree which is said to have grown from a branch of the tree under which the Buddha gained enlightenment. It was planted 2250 years ago and is the oldest historic tree in the world.

After experiencing the strong presence of history and civilization in Anuradhapura, depart for Kandy. On the way, visit a spice garden at Matale. Stroll amidst the enthralling aromas of cinnamons, cardamons, pepper plants etc. You can also purchase your requirements of spices. Shortly after, visit the batik factory nearby, whre you can interact with the artisans and witness the creation of the beautiful Batik prints – the attached shop is a wonderful place to add to your bag of local handicrafts to take back home.

The next morning, embark upon a city tour of Kandy, The hill city is the venue of the annual Perahera and was the last stronghold of the Sinhala Kings, finally ceded to the British in 1815. Kandy is an example of the Buddhist influence in present-day Sri Lanka. Temple shrines and monasteries keep the Buddhist influence alive.

After breakfast, visit one of Sri Lanka’s most charming towns – Galle. Built on a premonitory rock in the south of the Island, Galle was a major port until about 100 years ago; today though its importance as a port has dipped, it still handles shipping and sailing boats in the natural harbor. Stroll around the Light House and harbor or visit the old town where you can see the traditional lace makers and carvers and purchase some of the finest shell-craft souvenirs in the world.

On completion return to Colombo in the afternoon and embark upon a city tour of the capital.

A drive through the city will take you to the busy commercial areas as well as the tree-lined residential, Cinnamon Gardens.

Please note that the above is a sample itinerary for a 12-14 day trip to Sikkim. We design each trip according to your personal calendar, wishes & needs.