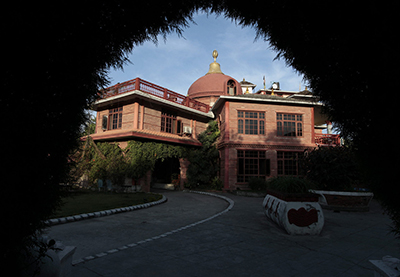 The tiny Himalayan nation of Nepal is a treasure trove of cultural experiences. Begin at the historic capital of Kathmandu – considered by many as an open museum of medieval arts & architecture. Discover ‘tranquil’ in the Pokhara valley, with majestic mountains & lakes for company. Interact with the different ethnic tribes of these regions as you embark upon a light to moderate trek through the hills & valleys.

The Classic Nepal tour is designed to connect travellers to the immense wilderness of these lands. There’s a good degree of outdoor activity involved and travellers can expect to have their thirst for adrenaline rush significantly satisfied.

Land in Kathmandu, followed by a transfer to the hotel. You’ve the first day at your leisure to explore and rest as you’d prefer.

On the second morning, join us as we explore the city of Kathmandu, the lively, buzzing capital of Nepal. The emphasis of this day tour will be on experiencing the rich cultural heritage of the city.

We set off early next morning to drive to Pokhara (3.5 hours drive). Pokhara is situated in the northwestern corner of the Pokhara Valley. The Seti River and its tributaries have dug impressive canyons into the valley floor, which are only visible from higher viewpoints or from the air. In no other place do the mountains rise so quickly. The Dhaulagiri, Annapurna and Manaslu ranges, each with peaks over 8000 m, can be seen from Pokhara and there is a lake named Phewa Lake, three caves (Mahendra, Bat and Gupteswor) and an impressive waterfall, Patale Chhango (Devi’s Fall) where the water from the Phewa Lake thunders into a hole and disappears. Due to this sharp rise in altitude the region of Pokhara has one of the highest precipitation rates in the country (over 4000 mm/year). We spend the night in the valley amidst wonderful landscapes all around.

The next day begins with an early transit from Pokhara to Nayapul and a climb up to the main village located on the ridge, Birethanti. Ghandrung is the largest Gurung village (or village of a renowned Gurkha soldier) in the region. We also visit the ACAP Museum.

Rise early next morning for a 6-8 hour long trek to an altitude of 2800 meters. Ascend through forests and open landscape to arrive at a small village. Continue to climb steadily with chirping birds for company as we arrive at Banthanti, located near a river. Trekking through the rhododendron forests along the ridge line, arrive at a clearing to get views of the Annapurna South Peak and the Ghorepani village far down below. As an interesting side, we pass through a densely populated village of a different ethnic community, Magars.

After a good night’s rest, embark upon a short, one and half hour trek to Poon Hill (10,200 ft) to view a magnificent sunrise over the Annapurna range. Shortly afterwards, return to Ghorepani. The trek descent gradually intensifies as you descend steeply to the river. Then there is more descending through a trail of gurgling streams and forests till our arrival at the Magar settlement of Ulleri.

Narrow lanes are followed by a steep knee wobbling descent on stone steps all the way down to the bridge on the Bhurgundi Khola which is dreaded by all trekkers. Challenge yourself to the edge of your adventurous self, as the trail becomes more hazardous with the mule train also vying to get in front (ascending and descending) and sometimes leading to traffic jams. Finally, make a short climb to Tirkhedhung, followed by a hard-earned night of rest!

The next morning, descend gently to the banks of the Bhurgundi river and follow the trail along the river to arrive at Birethanti. Birethanti located on the confluence of the Bhurgundi and Modi Khola is a booming village with rows of tea houses and also boasts of a bank. We then walk back to Nayapul and drive back to Pokhara.

Established in 1973, it was granted the status of a World Heritage Site in 1984. The park is located at subtropical inner Terai lowlands of South-Central Nepal in Chitwan district. Chitwan National Park is rich in flora and fauna, including one of the last populations of single-horned Indian rhinoceros (rhinoceros unicornis) and the Bengal tiger. Upon arrival at the jungle lodge, the managers and naturalists will brief you. After lunch, you will start your jungle activities such as an elephant safari for 2 hours deep into the jungle to experience the wildlife, flora and fauna of the park at close quarters followed by a bird watching tour. Spend the night amidst wilderness at the jungle lodge.

Wake up call next morning will come at 5:30 am. Tea will be served followed by either an elephant safari or a nature walk. After breakfast, participate in a canoe ride or a bird watching tour. Lunch at the lodge, followed by an elephant briefing at the elephant stables where naturalists will share insights and experiences on the Asian elephant. Here you will have an opportunity to witness and participate in the bathing of an elephant.

We leave early next morning to transfer you to Bhote Koshi. Participate in a three hour practice with Nepal’s top rafting agency on the lower section of the Bhote Koshi which as III and III+ rapids. Spend the night at a resort near the Tibet border.

Early next morning embark upon a mountain flight to see the splendor of the Himalayas before transfer back to Kathmandu.

You have the last day to explore the place to your leisure before an airport transfer for onward journey.