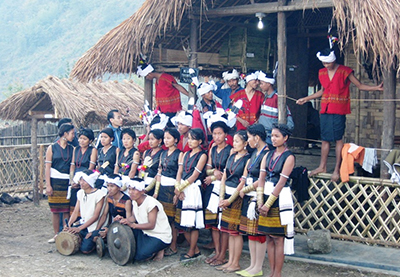 Discover the mysteries of tribal Assam & remote Arunachal Pradesh through this customised itinerary to the north-east frontier of India. The trip crafts a trail across remote villages in the hills & mountains. Most of these are inhabited by indigenous tribes of a wide variety. Some are native to these lands, while others like the Monpa tribes have come from nearby lands of Tibet and made a home. The roads that lead to these remote settlements are treacherous and majestic at the same time. They ensure your forays through some of nature’s most breath-taking bounties will leave you with enough visual memories to last a lifetime.

Apatanis are, perhaps the most well settled of the indigenous tribal people of Arunachal Pradesh who have stayed behind and chosen to practice old tradition and custom as way of life even after the British left their land. Moving from a hunter-gatherer lifestyle to a more settled agricultural economy, harnessing the murmuring river Subansiri .Apatanis, living in perfect harmony with nature-for every tree they fell, five fresh saplings are planted, are appreciated for their long conservation tradition and their legendary skill and knowledge of weaving.

The Jouney: you will drive from Lilabari airport to Ziro- the largest Apatani Hong village. You will be hosted by a Apatani family in their Bamboo hut. You will explore the Apatani social customs, culture, food, unique agricultural tradition, weaving tradition and their craft. You will trek into the Bamboo forest and understand their traditionally sustainable method of pine and bamboo forest conservation. You will participate in a Apatani cultural programme in the village.

From Ziro valley you will be transferred to the historic city of Tezpur- the city of blood where you will explore the archaeological, heritage and pilgrimage sites on the bank of mighty Brahmaputra river.You will stay overnight in a old Assamese style tourist lodge

Tawang the headquarters of the Tawang district, located on the Western tip of the state on a mountain ridge at 12000 ft above sea level, is the land of the Monpa tribes- originally from Tibet, and a major centre of the Tibetan Mahayana Buddhism. On the way to Tawang lies the World's second highest motorable pass, the Sela Pass.

Tawang Monastery or Gompa also known as the 'Galden Namgyal Lhatse', a 400 year old Buddhist monastery of the Mahayana sect, built in the 17th century is the jewel in the crown of this historic Himalayan town. It is situated on a cliff at a height of 3500 meters or 10,000 feet overlooking the great mountains of two bordering countries – China and Bhutan. The monastery which is considered as second largest outside Lhasa, was founded by a legendary monk, Mera Lama, a contemporary of the fifth Dalai Lama. It is a vast complex of 65 buildings - a treasure house of old scriptures, priceless images, painted tapestries, books and collection of gold lettered Buddhist scriptures. The reading hall and the library of the monastery house the rare hand written and block-printed Thangkas or manuscripts of revered books. The collection includes 108 gold-embossed manuscripts of the 'Teaching of Lord Buddha'.

The Journey: From Tezpur you will take a 6 hours drive to Bomdila following the ancient trade route connecting Tibet to the Brahmaputra plains.The road enters the elephant country along the Nameri Tiger Reserve where a dusk-driving enhances the prospect of having elephant herds blocking your passage! You will stop on the way to visit the largest Orchidarium at Tipi which houses 500 species of rare Orchids. From Bomdila you will hit the serpentine mountain road, you will stop at Sella for acclimatization and also to visit the War memorial. In Tawang you will visit the Main monastery, craft centre and emporium, local market, war memorial, 6th Dalai Lama's birth place and a traditional Monpa tribal stone village. You will explore Monpa farming, brewing of local beer and their strong social custom and cultural tradition. You will trek to the monastery of the nuns. From Tawang you will come to a beautiful and small village named Thembang where you will be hosted by Monpa villagers in their Home stays. In Thembang you will visit the fortified village, monastery, stone village, sheep-breeding farm and you will take a birding tour to Sangti Valley - a sanctuary of the Tibetan Black-necked cranes.

From Dirang your next destination is Nameri, a National Park and Tiger Reserve on the banks of Jia Bhoroli river which is a hot spot for Mahasheer fishing.You will stay here for a night in transit.

On the last day, transfer to Guwahati airport and depart for Delhi or proceed for Kaziranga National Park extension tour.

Please note that the above is a sample itinerary for a 12 day trip to North-East India. We design each trip according to your personal calendar, wishes & needs.