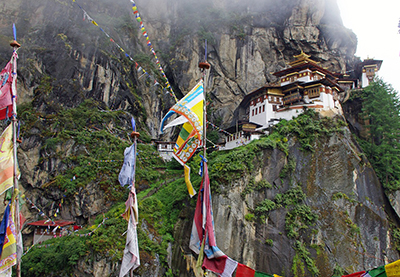 Journey to the Tigers Nest

A Journey To The Tigers Nest

The Taktsang Monastery, also known as the Tiger’s Nest is one of Bhutan’s most well known landmark. The Journey to The Tigers Nest despite its name, is a lot more than just the Taktsang Monastery. This typically 6-7 day tour reveals many hidden secrets of this ancient kingdom. Discover the legend behind each dzong or monastery. Understand the simplistic lifestyle of its monastic tribes. Immerse yourself in Bhutan’s priceless wildlife with the majestic Himalayas for company. Join us on a journey of storytelling as we re-trace the lives of its many artisan communities.

Arrive at Paro airport and enjoy a relaxed meal at the hotel restaurant. After lunch, drive to the ancient ruins of Drukel Dzong. The Dzong was build by Shabdrung Ngawang Namgyal – the lama responsible for unifying Bhutan as a nation state, as a monument to the victory over Tibetan invaders in 1644. Visit the Kyichu Lhakhang – one of Bhutan’s oldest and most sacred monasteries, dating right back to the introduction of Buddhism in the 8th century before returning to your resort for dinner.

The following day after breakfast, join us on a breathtaking journey to Taktsang Monastery (The Tiger’s Nest), which has been on the cover page of a thousand splendid tour guides to Bhutan. After lunch, visit the Rimpung Dzong (Paro Dzong), built in 1646 by Ngawang Namgyal – the Dzong presently houses administrative offices.

After a leisurely breakfast, join us on a short trek (4hours) as we walk through terraced paddy fields and coniferous forests to the settlement of Geynikha (2950 meters). The route then descends to a chorten that marks a stream-side camping place at 2800 meters.

Wake up the next morning to the tranquil sound of a stream and resume the trail that takes you past a suspension bridge and heads west for a while. A steep but short climb follows towards the south to a rock platform and a crest at 3200 meters. A further walk of about two hours leads to a camp in a forest clearing at 3290 meters. Walking Distance - 7 Km, 5hrs. Ascent 550 meters, Descent 210 meters.

The next morning, we’ll cross a pass at 4240 meters for a spectacular view of Dagala Village. Pass through an assembly of herder camps on your way to the foot of the broad Labatamba valley at 3400 meters. The valley is close to Utso Lake, home of the Golden Trouts of Bhutan, and one of many lakes in the vicinity. Set up camp for the night at 4300 meters, next to the lake. Walking Distance: 12 Km, 5hrs, Ascent 1040 meters, Descent 110 meters

Resume the trek next morning as the trail climbs along the western side of the lake to saddle at 4500 meters. Take a moment to admire some great panoramic views. The trail now takes you on a sharp descent to another lake at 4350 meters. A short distance beyond the lake leads to the valley and then to Panka at 4000 meters, where you will set up camp for the day. Walking Distance 8 kms, 6-7 hours, Ascent 260 meters, Descent 520 meters. Camp at 4000 meters.

The route leads north crossing a pass at 4000 meters, then climbs along the side of the ridge to a crest at 4270 meters. From here there is a view of the Dagala range and a view of Thimphu, far to the North. It is then a long descent through forests to the Goemba and village of Talakha (3080 meters). Walking distance: 8 kms, 6-7 hours, Ascent 180 meters, Descent 1100 meters, Camp at 3080 meters.

The next morning, walk downhill on a steep trail to Chamgang (2640 meters). After 5½ days of upbeat trekking, indulge in the luxury of a vehicle once again as we transfer you to Thimphu for lunch. The rest of the day is at your leisure to stroll around and explore the town. Walking Distance: 6 Km, 3 Hrs, 440 meters descent. The next day is reserved for sightseeing around Thimphu. Visit the National Library, which is a treasure trove of ancient Buddhist manuscripts, followed by a visit to the Painting School, famous for carving & free hand art and the National Institute of Traditional Medicine. Post lunch, join us on a walk down Bhutan’s history books as we visit the Simtokha Dzong, the oldest Dzong in Bhutan built in 1627 by Ngawang Namgyal, which now houses a school, followed by the National Memorial Chorten, a monument dedicated to the Third King of Bhutan – His Majesty, King Jigme Dorji Wangchuck. The paintings & sculptures provide a rare insight into Buddhist Philosophy. Up next is a visit to the Handicrafts Emporium to soak in the exquisite artistry of Bhutan’s traditional crafts & textiles. Visit the Taschichoo Dzong (Fortress of the Glorious Region), before you set off for an leisurely evening for shopping and exploring.

After breakfast, drive to Punakha via Dochula pass. Weather permitting; we take a short stop at Dochula pass to bask in the shadows of the Higher Himalayas.

Look at the Wangdiphodrang Dzong built in 1638 (from outside). Legend says when people were searching for the site of the Dzong, four ravens were seen flying away in four directions. This was considered an auspicious sign, interpreted as the spread of religion to in all four directions. The Dzong is situated at the confluence of Mo Chu and Tang Chu rivers. Spend the night in a cottage stay before heading back to Thimphu. You have the last day at your leisure for shopping & photography in town, before an early morning transfer to the airport.