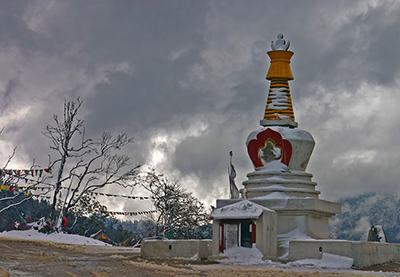 Bhutan is an ancient land. This is one destination that even the most seasoned travellers take ages to tick off their bucket list. Perched high atop the mighty Himalayas, Bhutan has consistently defied the nuances of globalisation. It has chosen to remain a hidden paradise. No amount of time will ever feel enough to discover all its secrets completely. Through Glimpses of Bhutan, we attempt to acquaint you with the many stories and legends that connect the magnificent monasteries to its monks & people.

Despite its evident allure both as a scenic and spiritual destination, its remote location and strong preservation efforts make it less accessible. Through our Glimpses of Bhutan package, you will discover why Bhutan is a privilege for any experiential traveller.

Trek through Bhutan’s beautiful valleys as you journey through one of the most peaceful lands on earth. Discover the simplistic lifestyle of its monastic communities and uncover legends several centuries old.

Arrive at Paro Airport and drive to Thimphu. On the way, visit Tamchog Monastery built by Thangthong Gyalpo (Popularly known as Lama Chazampa, which literally means, the Iron Bridge builder) in the 15th century.

Thang Thong Gyalpo (1385 – 1464) was a wonder working saint from Tibet who came to Bhutan in 1433 looking for Iron Ore. He built 108 bridges across Tibet and Bhutan, out of which 8 were built in Bhutan. His only surviving bridge is in Duksum (Tashi Yangtse in Eastern Bhutan).

After lunch, visit Memorial Chorten, a monument dedicated to the Third King of Bhutan - the Late King, His Majesty Jigme Dorji Wangchuck. The paintings & sculptures provide a rare insight into Buddhist Philosophy. The drive also includes pit-stops to visit Changangkha Monastery, Takin Preserve centre and Sangay Gang view point, the Largest and tallest statue of Buddha in the world and Tashichho Dzong. Dinner and overnight in Hotel Migmar or similar.

The next day, drive to Punakha via Dochula pass after a hearty breakfast. Weather permitting; we take a short stop at Dochula pass to bask in the shadows of the Higher Himalayas.

After Lunch, embark upon an excursion to Khamsung Yulley Namgyal Choling Monastery. Dinner and overnight in Punatsangchhu Cottages or similar.

Lama Drukpa Kuenley (1455 – 1529) was one of the Bhutan’s Favourite Saints who was born in Tibet, trained at Ralung Monastery and was a contemporary and a disciple of Pema Lingpa. He Travelled throughout Bhutan and Tibet as a “Neljorpa” (Yogi) using songs, humour and outrageous behavior to dramatise his teachings of Salvation through sex.

Further sightseeing in the valley of Wangdiphodrang, includes a visit to Wangdiphodrang Dzong (from outside) built in 1638. Legend says when people were searching for the site of the Dzong, four ravens were seen flying away in four directions. This was considered an auspicious sign, interpreted as the spread of religion to in all four directions. The Dzong is situated at the confluence of Mo Chu and Tang Chu rivers.

After lunch, drive to Thimphu, where you have the rest of the day free for shopping and exploring the city. Dinner and overnight stay at Hotel Migmar or similar.

The following day, visit the National Library, which holds a vast collection of ancient Buddhist manuscripts followed by visit to Painting School, famous for carvings and free hand art and the Folk Heritage Museum.

After lunch, visit the Handicrafts Emporium to see the exquisite artistry of traditional crafts and textiles, followed by an evening transfer to Paro. Dinner and overnight stay at Tashi Namgay Resort or similar.

The next morning, an early breakfast is followed by a short drive to Satsam Chorten, whence you embark upon a short trail that climbs through a beautiful pine forests; many of the trees are festooned with Spanish moss, and an occasional grove of fluttering prayer flags. We stop for a rest and light refreshments at the Taktsang Jakhang (cafeteria) and then walk a short distance until we see, clearly and seemingly within reach, Taktsang monastery. The primary Lhakhang was built around Guru Rimpoche’s meditation cave in 1684 by the Penlop of Paro, Gyaltse Tenzin Rabgay, this incredible monastery clings to the edge of a sheer rock cliff that plunges 900 meters into the valley below. Legend has it that Guru Padmasambhava, the tantric mystic who brought Buddhism to Bhutan in 747 AD, flew here on the back of a flying tiger, Dorji Drolo, said to be his favourite consort. After lunch, visit the Ta dzong, an ancient watchtower, which has been, since 1967, the national museum of Bhutan then visit Rimpung Dzong (Paro Dzong) built in 1646 by Shabdrung Ngawang Namgyal. The Dzong presently houses administrative offices.

In the evening, visit the Drukgyel Dzong was built by Shabdrung Ngawang Namgyal to commemorate the victory over the Tibetan invaders in1644; the dzong whose name means “victorious Druk“ now lays in ruins but was used as an administrative center until 1951 when a fire caused by butter lamp destroyed it. Later, visit Kyichu Lhakhang, one of Bhutan’s oldest and most sacred monasteries dating right back to the introduction of Buddhism in the 8th century.

Srongsen Gampo: He was a Tibetan king who married a Chinese princess, Wenchen in 641, as a apart of her dowry was a statue called “Jowo” which was an Indian image of Buddha, Sakyamuni as a small boy. In 659, He decided to build 108 Temples in a single day to pin the Ogress to the earth forever and, at the same time, convert the Tibetan people to Buddhism. 6 of these Temples lie in Bhutan, most prominent of them are Jambay Lhakhang in Bumthang and Kichu Lhakhang in Paro. Kichu Lhakhang is said to hold the left foot of the Ogress and Jambay Lhakhang pins the left knee.

Dinner and overnight in Tashi Namgay Resort or similar.

Please note that the above is a sample itinerary for a 6 day trip to Bhutan. We design each trip according to your personal calendar, wishes & needs.