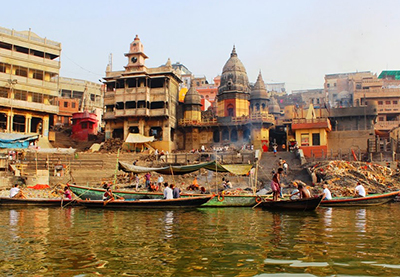 Walk through the waterfront and take in the ghats (series of steps leading to the river) from Asi Ghat to Dashashwamedh Ghat. Your local storyteller will regale you with stories and legends on each leg of the tour. Covering half of the sites on the Panchatirthi or five scared folds pilgrimage, you will be witness to pilgrims engaged in prayer and ritual bathing.

From Asi Ghat, we will walk downriver, passing Tulsi Ghat (named after poet-saint Tulsidas). Continuing on, we will pass the ashram of Anandamayi Ma and the 17th century palace of Maharaja Chet Singh, to reach Hanuman Ghat, which houses a sizeable South Indian population. Noteworthy in Hanuman Ghat are the Hanuman (Monkey God) Temple and the temple of Ruru (The Dog) Bhairava.

Harishchandra Ghat, one of the two burning ghats of Varanasi, will be next and you are sure to see rituals for the dead being performed. Continuing downriver is Kedara Ghat, a busy ghat, followed by Chauki Ghat. Climb to the top of the steps and you will come upon a giant tree with shrines to the serpent dieties, the Naga. As we proceed, you will see dhobis, the washermen, washing and laying out great masses of clothes. Three more ghats, Mansarovar, Narada, Amareshwara and Chaunsathi Ghat will be along the way – each of them named for a deity.

The tour ends at Dashashwamedha Ghat, where you will see the temple of Shitala Devi, the goddess who cures ailments and pox.