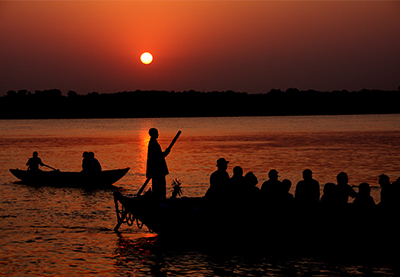 The Old City of Varanasi is at its charming best at dawn. Join us as the holy city rises to offer its morning prayers along the banks of its many Ghats.

The Varanasi Old City Walk actually begins with a 45 minute boat ride that takes you between the Dasashwamedh Ghat and Manikarnika Ghat. Your local storyteller will talk about the history of Varanasi and introduce you to the city’s morning rituals and explain what’s special about the many ghats you come across on your boat ride.

As you get off the boat at Manikarnika, the burning ghat where cremations take place, you’ll get a firsthand look at the ceremonies and activities. You will also get to see a sacred water tank, Manikarnika Kund.

Next, you will traverse narrow lanes with lodging for pilgrims, residences and shrines that lead you to the heart of Varanasi and the Golden Temple, Kashi Vishwanath Temple, the city’s best known pilgrimage spot. An optional stop on the 45 minute walk is at Satua Baba Ashram, where scriptures are taught to boys and young men in ancient Sanskrit. A visit to both Kashi Vishwanath and Annpurna Temples is on the agenda, after which the tour will end at the ‘Phool Mandi’/Flower Market, adding some color to the morning.