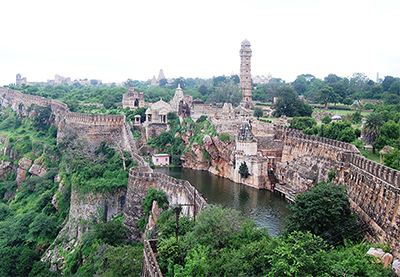 This day trip to Chittorgarh Fort focuses on exploring the ruins of Chittor, dramatic with its palaces, temples, towers and reservoirs. This ancient city was the capital of the Mewar kingdom for over 800 years. The stories surrounding the city, and its dashing rulers, are the stuff of legends and lore. During its colorful and eventful history, there were many battles won and lost – the ones lost remain in memory for the dramatic events that followed. Invading Muslim rulers ransacked the fort and as the men were defeated in battle, the women and children of the royal households committed suicide via Jauhar (self-immolation) – considered by the fierce warrior culture of the Rajputs to be preferable to capture and shame by the invading forces. The fort was abandoned in 1567, and left unoccupied, after the last attack that year.

Here’s a short summary of the highlights of this trip. For company, our local storyteller will give you the deep insight into the history and lore of each site: