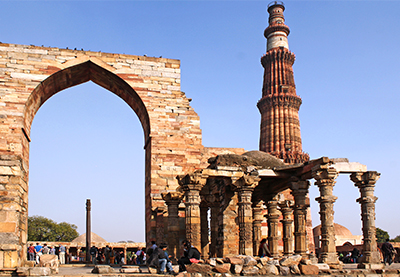 The Qutub Minar complex takes one back to the dawn of Islamic rulers in India, when the “Slave Dynasty” from Turkey brought Islam and their ways to India. The area is today a UNESCO World Heritage site. Second only to the Taj Mahal in terms of visitors, the complex houses the 73 metre tall Qutub Minar, a tower of victory built at the end of the 12th century and the world’s tallest freestanding redstone minaret. You will also see India’s first mosque, the Quwwat ul Islam. Delhi’s famous Iron Pillar, a 7 metre tall construction that is known for never rusting, created with an amalgam of rust resistant metals, stands in the courtyard of the mosque and is another interesting sight. The ornately decorated and striking Alai Darwaza is a domed gateway on the southern side of the mosque. Constructed in 1311, the red sandstone and marble inlay work is the first example of true arches and domes in Indian architecture. The Alai Minar, a tower that was conceived to be twice the Qutub Minar’s proportions, is an incomplete structure that will catch your eye on the tour. Never completed after the death of the king who commissioned it, Alauddin Khilji, it is considered by many to be a fool’s errand.

Tour Details: The duration of the tour is one and a half hours; it runs every day and the preferred timings are 9.00am or 4.00pm, but it can be conducted at any time.