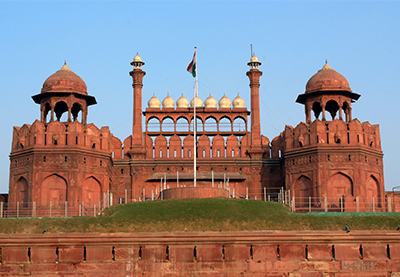 Located in the center of Delhi, the Lal Qila, Red Fort, was home to Mughal emperors of India from Shah Jahan to Bahadur Shah (the last Mughal Emperor of India), over a span of 200 years. The ceremonial and political center of the Mughal Empire, the Red Fort was the last of the many forts built by the Mughals in the 1600s. A UNESCO World Heritage monument since 2007, the Delhi Red Fort is an iconic image of India and sees regular throngs of travellers from all over the world. Every year, the country’s Prime Minister conducts Independence Day festivities from the Lal Qila.

During the tour, we will visit the public and private audience halls. Stroll through the women’s quarters, the private residences, baths and gardens of the Mughal emperors. You will see up close the Shahjahani architectural style – a fusion of Persian, European and Indian styles.

There is a sound and light show in the late evening, which is not included in our tour.

Tour Details:
The tour is available 7 days a week, and runs for 2 hours. You can pick any two hour slot between 9:00 a.m. and 5:00 p.m. Afternoons are best avoided in the summer.