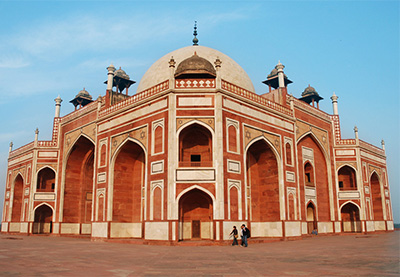 Humayun’s Tomb – A Precursor to The Taj Mahal

This tour takes you to the garden complex where Humayun (the second Mughal Emperor) is buried. Humayun’s Tomb enjoys the distinction of being the first garden-tomb on the Indian subcontinent. It inspired several major architectural innovations of the time, and was the first building to make such large scale use of red sandstone. The tomb was commissioned by Humayun’s first wife. It is also a UNESCO World Heritage site. We will also visit the Nai ka Gumbad, known colloquially as Barber’s Tomb. Who is interred there is a mystery lost to time. This red and grey sandstone structure is right beside Humayun’s tomb. We will also visit the tomb and mosque of Isa Khan, an influential Afghan noble of the court of Sher Shah Suri, dating to the 16th century. Both structures are constructed of local grey quartzite, with red sandstone and colored tile inlay decorations. We will also see the Nila Gumbad, or Blue Dome tomb, with its striking blue tiles, built by a courtier of Emperor Akbar, for his servant Miyan Fahim.


Tour Details:
Running for approximately 90 minutes, this tour can be conducted at any time of the day, 7 days a week, with preferred times being 9.00 am and 4.00 pm.