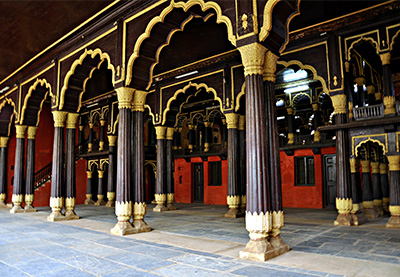 Spend an entire day discovering this bustling city and its various angles. You will see the city on foot and by car and your personal guide will share with you the history and legacy of the city. Built in the 1500s by Kempe Gowda, he marked the boundaries of the city with four towers. Your first stop will be at Lalbagh Gardens (The Red Gardens), where one of the towers is. With a lake, aquarium and tropical plants, it’s a popular spot with locals and is a distinctive part of the landscape in South Bangalore. Lalbagh plays host to the annual flower show in August, held in its famous glass house and is also a popular spot with birders. Next we’ll head nearby to Tipu’s Summer Palace – Tipu Sultan is one of the significant rulers whose contributions are still reflected in the local landscape. The palace, though derelict, is representative of the wooden architecture of the period. After the palace, we’ll head to the Cantonment area, established by the British in the 1800s after they defeated Tipu Sultan. You will visit the bazaar, army residential areas as well as a well-known old church. The rest of Bangalore, away from the Cantonment was nominally still under the Maharajah of Mysore (the Wodeyar family) and we will visit the Palace of the Wodeyars as well.

The Vidhana Soudha is an arresting government building that was constructed post-Independence, featuring hybrid architecture and Indian motifs. You will be able to take photographs of the buildings in the area as we drive by, and then we will take a stroll through another of Bangalore’s parks, Cubbon Park. If it’s of interest, before you are dropped back to your hotel, a drive through one of the city’s tech hubs will give you a feel for India’s Silicon Valley and a look at the new face of Bangalore.