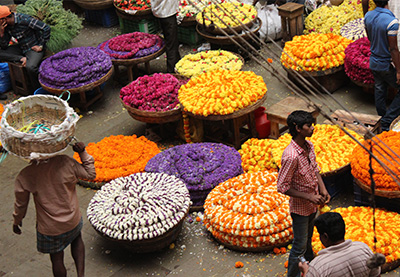 Bangalore is getting as well known for its infamous traffic as for being India’s Silicon Valley. To avoid the stress and rush hour hassles, we’ve come up with a tour that takes you around the city in the early morning to see some of the major monuments, and you’ll get to see the early-to-rise locals in action in the markets, temples and parks. At dawn, we’ll head to KR Market, a wholesale vegetable and flower market, so you can watch the morning trucks arrive and unload their colorful wares – it will be a whirl of color and chaos and a perfect photo op!

Next we’ll drive to one of Bangalore’s oldest neighborhoods, Basavanagudi, to visit the famous Bull Temple for which the area is named and indeed the very street is known as Bull Temple Road! Then we’ll stroll through Bugle Rock Park, where the main rock formations have been dated to 300 million years ago! A visit to this area would be incomplete without a stop in Gandhi Bazaar for the famous local coffee and breakfast of South Indian specialties at a famous local café.

Then we’ll head to the central part of Bangalore so you can see two of Bangalore’s most famous parks, Lalbagh Gardens and Cubbon Park, the VidhanaSoudha (Government building), and the High Court.