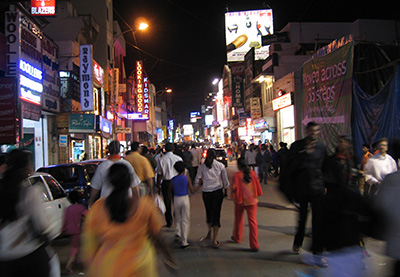 In the early 1800s, the British built a military Cantonment in Bangalore, the largest garrison in South India. The military establishment went on to include clubs, churches, shops, cinemas and bungalows. The area around the Cantonment became a native settlement filled with Hindus, Muslims and Anglo-Indians and English, Urdu and Tamil were spoken. Today, the area around the Bangalore Cantonment is still a bustling, multi-cultural area, sans the military presence.

We will begin our exploration at Hatworks Boulevard, a 145 year old heritage building that now houses boutiques, an art gallery and a coffee shop, where once stood the Imperial Hat Works. This bungalow has Burma teak windows and doors associated with Bangalore bungalows of the era. Next we’ll drive to St. Marks Cathedral, an Anglican Church dating back to 1808, built for the British garrison. St. Marks is known for its grand pipe organ, architecture and a music academy. A drive through the M.G. Road area will then bring us to the Holy Trinity Protestant Church which has tablets dedicated to the British who lived in Bangalore.

Old Airport Road is where you will see the sections belonging to the Indian Armed Forces. We will drive by Ulsoor Lake and go to the bustling Shivaji Nagar bazaar. An exploration on foot of the neighborhood, famous locally for its street food, will be next. We will also see Mariamman Temple and St Mary’s Basilica. Russell Market is a place for great photographs and we will traverse this market with its sections for flowers, vegetables, fruits, fish and meat. Our last stop will be Shivajinagar to see the old furniture and bamboo bazaar. After this, we will drop you back at your hotel.