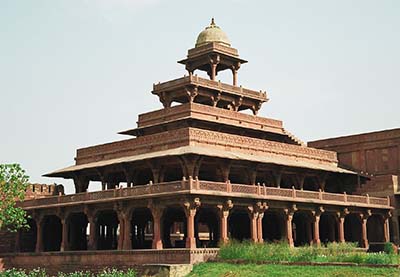 Another of India’s 32 UNESCO World Heritage sites, Fatehpur Sikri is about an hour’s drive from Agra. Emperor Akbar moved the Mughal Empire’s capital to this city to be where the Sufi saint Salim Chishthi, lived. Chishthi had predicted the birth of Akbar’s much longed for son Jahangir, and also been Akbar’s supporter in war. Named the City of Victory, Akbar was deeply involved in the design and building of Fatehpur Sikri, but after a few years moved capitals again, to focus on his war against the Afghans.

The city comprised of palaces, public buildings and mosques and had living area for the Mughal court, its army, tradesmen, merchants and the general populace. Built of red sandstone, the monuments are a mix of Hindu, Persian and Indo-Islamic style and tradition. The archaeological exploration of the city (to date, only a small portion of this city, where the palaces and bigger monuments are have been studied) began in 1892. During your time at the city, your guide will lead you across the major monuments and fill you in on all the stories and history.