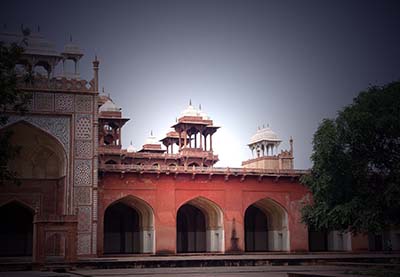 Agra has beautiful tombs with their own stories, from before the Taj Mahal was conceptualized and built. This tour will take you to two of them – the imposing red tomb of Akbar the Great that he commissioned for himself before his death, and the elegant white tomb of Itmad-ud-daulah, sometimes called the Baby Taj, and believed to be the inspiration for the Taj, since it was the first all-white marble, pietra dura style building constructed in Agra, later emulated for the Taj. Commissioned by the Empress Noor Jahan who was a strong and immensely power presence in the Mughal court, it was a tribute to her father Mirza Ghias Beg. A Persian who rose to prominence in the Mughal courts, he was given the title Itmad-ud-daulah or Pillar of the State, and served as Chief Treasurer and later Chief Minister of the Mughal Empire. the structure is located on the bank of the Yamuna River.

Akbar is the best known of the Mughal emperors, with a reign that lasted over 50 years and brought almost the entirety of northern India (of that time) under Mughal rule. He was known for religious tolerance, agricultural and land reform. There are stories galore, including the popular children’s series Akbar and Birbal that talks of the emperor’s greatness. Akbar’s tomb at Sikandra, on the outskirts of Agra was designed and completed within his lifetime. Your guide will regale you with tales of Akbar as you tour the tomb.